Who you know and who your friends and relatives know can lead to exciting adventures. Prior to my month long trip to Australia, to visit my Daughter, Sheri, and her husband
and two kids, I asked her if she knew anyone who could take me fishing. As it turns out, her sister in-law’s father in-law, Phil Breckell, responded to Sheri’s request in an enthusiastic manner, setting up a couple of trips for me. Phil is the kind of guy with an infectious sense of humor and loaded with charisma. This man has lived and worked throughout New South Wales for his entire life and knows countless people. Prior to my arrival Phil contacted one of his former co-workers, Steve, who has a sister, Diane. Diane works in the medical field and worked and lived in Alaska for 26 years. She now lives with her husband, Rolf, and lives in Australia’s south coast at St. George’s Bay, near Jervis Bay.

Stunning views await those who visit the South Coast of Australia

During stormy days this blow hole can shoot more than one hundred feet in the air. Today is was a mild blow.

Upon learning about me coming to Australia, Rolf and Diane invited Phil and I to stay the weekend at their home and go saltwater fishing. The road trip from Sheri’s house
took us through some scenic areas, including Mount Keira Summit Park, Kiama Coast and Kiama Blow Hole. Australia’s South Coast is nothing less than spectacular, with miles long
sandy beaches, rocky headlands, white surf, fish filled azure collered waters, steep cliffs and abundant wildlife. The tiny towns that sit stratigically along the coast have a unique charm and postcard quality abience that excites my photographic eye.

Five hours after leaving for St. George’s Bay, we arrived at Rolf and Diane’s waterside home. Rolf enthusiastically welcomed us and invited us into his home. A quick look
around the house revealed Alaskan art adorning the walls, book cases and even Rolf’s shirt. Visiting with this couple was a joy, and included lots of stories from Australia
and Alaska, where the couple now owns a cabin near the Kenai River.

The boat launch at the park, which is in Australia Capital Territory

Pre-dawn the next morning, with boat in tow, Rolf stopped at the local gas station. The small store had a wall of local tackle that caught my eye. Rolf told the young lady
behind the counter I was visiting from the United States and was also a guide in Southeast Alaska. She quickly told me she spent time in Ketchikan and knew some of the
people I know there, proving the world is small.

We launched the boat at Booderee National Park and headed into Jervis Bay and then to the Canyon offshore, in search of marlin. Our marlin attempt resulted in no strikes,
prompting Rolf and Steve to move close to shore at a place called Drum & Drumstick. Layers of rock soaring toward the sky create an angler’s or diver’s paradise. I used
Point Wilson Dart jigs here, sending them to the bottom and jigging them through the water column. Rolf and Steve used “Auzzie” lures and baits. My first saltwater fish,
a small mackerel tuna grabbed my anchovie jig. Steve caught several morwong and Rolf reeled in a big cuttlefish. I also caught and released a small flathead while in front
of the world famous “Tubes” on the northern headland of Jervis Bay. This is the spot anglers catch big marlin and tuna that follow a current from offshore to this cliff
that was formerly used for storing submarine torpedoes.

Fishing nearshore at Drum and Drumstick

My first saltwater fish in Australia

Can you imagine fishing marlin here? Fun and dangerous. They now have a set of stairs to help anglers get to this popular spot.

This is the farthest end where anglers fish the Pipes

Rolf caught this nice cuddlefish. We ate it that night. It tasted like squid.

This map shows the park 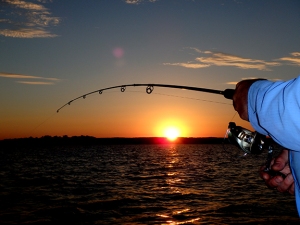 Rolf waiting for a bite as the sun rises near his house.

Day two we launched the boat just in St. George’s Bay and fished close to Rolf’s house. While I failed to land any fish during our short morning of fishing the bay,
Rolf’s neighbor managed to land one snapper and a nice flathead that Rolf held for my pictures.

Thank you to my daughter, Phil Breckell, Steve Fornasier and Rolf and Diane Wick for helping me fish Australia’s beautiful saltwater.

As they say, it’s not always
what you know, but who you know. In this case, who you know helped me make new friends and have a great experience in Jervis Bay.

Here’s a few shots of parrots that hang out at Rolf and Diane’s.